Home » Newspaper » Back Issues » Japanese Prints and Paintings: The World of Edo 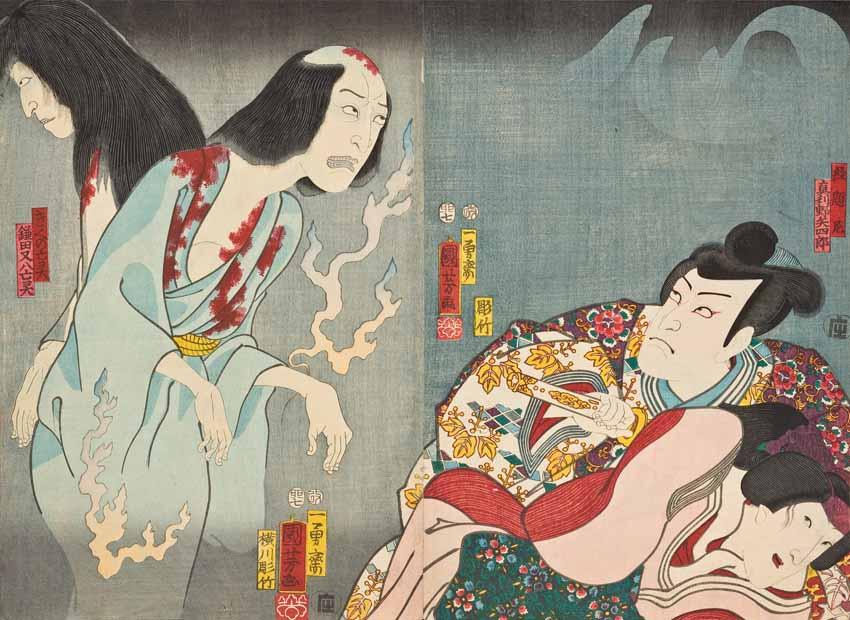 THIS EXHIBITION IS in celebration of the 35th anniversary of the Japanese Art Society of America, formerly the Ukiyo-e Society of America. Like the Asia Society, the Japan Society, the Korea Society and the Rubin Museum of Art, JASA’s existence as a private cultural society is due to the enthusiasm of private individuals, such as John D. Rockefeller 3rd, in the case of both Asia and Japan Societies, together with their ongoing support. This magma chamber of intellectual enthusiasm among many collectors has traditionally made New York a centre of Asian art activity. To add to the celebrations an exhibition of Japanese prints and paintings has been curated at Asia Society.

Designed for Pleasure includes major loans from Asia Society’s Mr. and Mrs. John D. Rockefeller 3rd Collection; The Seattle Art Museum; The Art Institute of Chicago; The Metropolitan Museum of Art; The Asian Art Museum of San Francisco; The Cleveland Museum of Art; The Museum of Fine Arts Boston; The Brooklyn Museum; the Mann Collection; the John C. Weber Collection and numerous other private collectors, most of whom are members of the Japanese Art Society of America.

Most ukiyo-e exhibitions in the past have been straightforward shows in which emphasis had been concentrated on the artists themselves, together with an overview of the society in Edo that supported this art form. This exhibition of Japanese prints and paintings, however, is not so easily satisfied with that limited approach. For the first time, it completes the mosaic of the ukiyo-e world by explaining the interrelationship among artists (as painters, print designers and book illustrators), subject matter, the public market, woodcut designers, private commissions, patrons and publishers. Therein lays the importance of this anniversary exhibition of approximately 120 prints and illustrated books and 30 paintings.

A History of Japanese Prints

From the 1680s until the very early years of the 18th century, prints were mainly large-format (oban) black and white prints. Through the 1780s, most prints were in an upright, narrow format (hosoban), initially with some hand-colouring, then with one or two printed colours, and finally with full-colour printing. The exception to this format was most of the prints of Suzuki Harunobu.

Working mainly in the 1760s, he used a basically square format (chuban, roughly 7 x 10 inches) as a full-colour, often embossed, canvas for his delicate, androgynous figures.  Mainly in the 1790s, artists such as Kitao Masanobu and Kitagawa Utamaro produced works in oban format (roughly 10 x 15 inches), a shape that has dominated most ukiyo-e prints ever since, either as single sheets, or as diptychs, triptychs and pentaptychs.

The masses have always loved popular images. In the West, they ranged from famous sites to great actors or outstanding beauties – Laurence Olivier, Cary Grant, Vivian Leigh, Greta Garbo and the like, and during World War II, which American GI did not have a pin-up of Betty Grable? The Japanese were no exception. Images of kabuki actors dominated much of the 18th century, ranging from the early black and white images of Okumura Masanobu to the world’s first fully coloured prints of Suzuki Harunobu (1760s) and the bold bust portraits of actors by Toshusai Sharaku (active 1794-95).

Edo, modern Tokyo, the largest city on earth in the early 18th century (approximately 1,000,000) was the centre of the ukiyo-e world. Populated by a citizenry of lopsided demographics, it was comprised almost exclusively of shopkeepers and merchants with money to spare and without the cultural presence of a large aristocracy whose refined taste defined local culture and morality.

Up until the 1770s, actors were the main subjects. In the 1790s, numerous prints, paintings and book illustrations depicted subjects that would have never been acceptable in Kyoto: actors, waitresses, brothels and prostitutes (usually referred to as ‘courtesans’). It is as if today, popular images for public consumption were those of Christine Keeler, Paris Hilton, Xaviera Hollander and Heidi Fleiss.

However, the Japanese genius for composition and cultural euphemism saved the day. Whereas the Western images were photographic, the Japanese images were graphic. Unlike the camera’s exactness, the Edo artists were free to create compositions, poses and settings that resulted, not in depictions, but in impressions. Almost all of the Edo artists were painters first and print designers second. With some exceptions, Harunobu in particular, the prints of the 18th century generally excluded a background in the composition, relying rather on the use of the empty space as emphasis to the composition.

The late 18th-century designs of Utamaro in particular combined delicate colours, techniques such as details printed in lacquer or in raised relief or backgrounds printed as a field of mica (again, the empty background), with stunning results. The individuals depicted were often posed and juxtaposed with inventiveness and artifice that Cecil Beaton would have envied.

Utamaro’s compositions of the 1790s were masterworks due to his distortion of physiognomy, the use of both full and half figures and the ‘unposed’ position many took. His full figures were unnaturally elongated; his heads were disproportionately long, as were the noses; the necks were swan-like and both mouths and eyes were unnaturally small. The result of this artifice was elongated elegance with a whisper of sensuousness. The most obvious example of this subtleness is Utamaro’s view of a woman from the back, her face reflected in her mirror, but with her hand gently stroking her exposed neck, a point of great eroticism.

By the early 19th century, images of famous sites became very popular, mainly due to a relaxation of travel restrictions and the best two examples of series of famous sites were Hokusai’s Fugaku sanjurokkei (36 Views of Fuji) and Hiroshige’s Tokaido gojusan tsugi no uchi (53 Stations on the Tokaido Road), sources for Hokusai’s famous Great Wave off Kanagawa and Hiroshige’s Driving Rain, Shono.

This exhibition of Japanese prints and paintings also gives one a rare chance to view Katsukawa Shunsho’s elegant paintings of beauties and complexly printed surimono by Hokusai and his circle and prints privately commissioned by the literati. Entailed in all this productivity of paintings and elegant prints was the coordination of efforts by publishers, Tsutaya Juzaburo being the best known and most influential, artists, patrons and the demands of the emerging marketplace.

Because the materials of some of the paintings and the vegetable colours employed in the prints are extremely light-sensitive and highly fugitive, the exhibition will rotate, displaying half of the printed works until approximately April 1 and the other half thereafter. This means that those in New York at that time will be able to see the entire exhibition of Japanese prints and paintings. One can find out the exact closing/reopening dates on the JASA website, www.japaneseartsoc.org.

There is a 1 March symposium on Edo Popular Culture on 1 March. Catalogue available. Designed for Pleasure is at Asia Society, 725 Park Avenue at East 70th Street, New York 10021, from  27 February to 4 May, more information on www.AsiaSociety.org.