Home » Newspaper » MOORISH SPAIN AND THE DELIGHTS OF ANDALUCIA 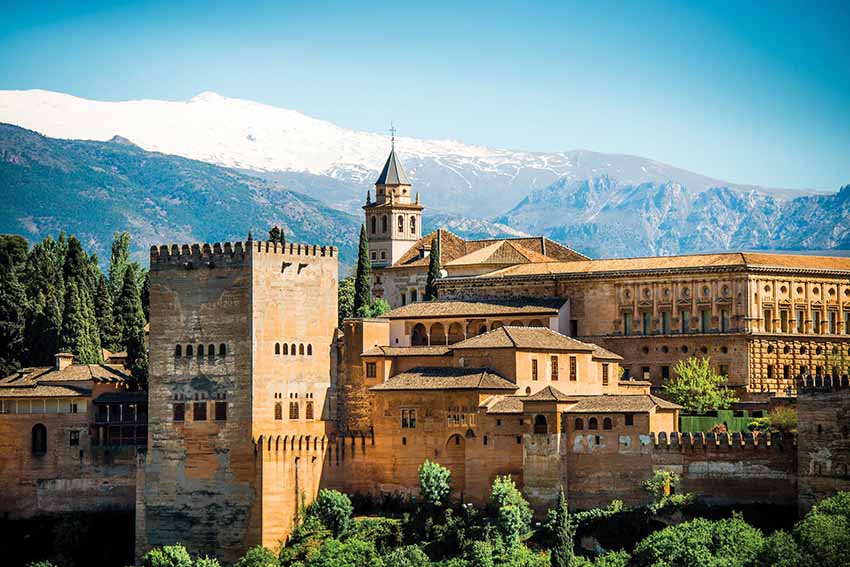 Andalusia’s complex history comprises successive invasions from the Phoenicians, Romans, Visigoths and the Islamic Moors who have left their rich cultural legacies on the landscape of Spain. The Moors, part of the Umayyad dynasty, were mainly a mixed race of Berbers and Arabs who crossed into Spain via Gibralta from North Africa in 711, and in three years, with only a small army, completed an invasion of most of Christian Spain. Only the far north resisted and the newly conquered area that became Al-Andalus. Here’s Asian Art Newspaper’s guide to Moorish Spain.

There Islamic Presence in Spain

This Islamic presence in Spain under the Caliphate spanned from the 8th to the end of the 15th century, exerting a profound cultural influence on the region, which is still visible today. The was a great explosion of art, culture and science, something that had not been seen in Europe on this scale before. First great flowering was in Cordoba, which by the late 8th century, had become the brightest, wealthiest, and busiest city in Europe.

This change was the cause of one man – Abd al-Rahman I, an exile from Damascus. His family were victims of the civil war between the Umayyad and Abbasid dynasties during the Abbasid Revolution (748-750) for the control of Damascus. Thrown into exile, after many years of travelling and quests for power, he eventually adopted Cordoba as his new home and became the first Caliph of Al- Andalus – establishing a new Umayyad dynasty and creating the beginnings of Moorish Spain.

Abd-al-Rahman Creates the Splendours of Damascus

Here, Abd al-Rahman attempted to recreated the splendours of Damascus in Spain – a paradise on Earth. Many philosophers, scientists and artists began to flock to Cordoba as a seat of great learning – creating a cultural revolution. During the golden age in 9th and 10th centuries, the three religions of Islam, Christianity, and Judaism lived in relative harmony.

The Great Mosque of Cordoba

In Cordoba, the conquering Moors made no effort to make the Christians and Jews to convert to Islam. For over 200 years, the religions tolerated each other creating a unique culture – Andalusi – which was tolerant society that adopted the customs, food, dress and culture of the Umayyad dynasty. Perhaps the most imposing symbol remaining of this great cultural flowering is the great mosque of Cordoba – when work began on this building Islam was only a century old – making the Mezquita one of the first mosques ever built.

This great mosque of Moorish Spain has columns that stretch as far as the eye can see, endlessly repeating themselves. It must have been an uplifting and awe-inspiring experience for the worshipper, where the design is uniform and where everyone could feel equal. It contains the Moorish characteristics of modified horseshoe arches, elaborate stucco work and the use of calligraphy as part of the decoration, together with the richly ornamented mihrab, which would have originally held a gilt copy of the Qur’an, serving as the focal point of prayer.

The arches are in red and white, the colours of the Abd Rahman dynasty. More than 850 columns of granite, jasper and marble support the roof creating an effect of a forest or grove, with the rows of the variegated columns and arches believed evoking date palms, invoking a meditative, expansive state for prayer. However, even though it is the world’s third largest mosque, in the 16th century a cathedral was built inside and the mosque was reconsecrated to Christianity.

Long after the fall of the Moors, the Christian rulers demolished the central columns of the mosque and built the elaborate cathedral you see today in its midst. It is said that the Emperor Charles V, who had ordered the construction, regretted his actions when the work was finished.

After the Death of the First Caliph

In the centuries after the death of the first Caliph, in 936, Abd ar-Rahman III of Cordoba (912-929) built a new capital just west of the city – Medina Azahara. Named after his favourite wife, Az-Zahra, it was planned as a royal residence, palace and seat of government. Under his reign, Cordoba became the most important intellectual centre of Western Europe. By 929, Abd ar-Rahman III was the Caliph of Cordoba and had declared himself leader of all Muslims in

The Rise of Al-Andalus

To celebrate this, he built this vast palace, which was extended during the reign of his son Al-Hakam II (r 961-976). Its chief architect was Abd ar-Rahman III’s son, Al-Hakim II, who later embellished the Cordoba Mezquita. In contrast to Middle Eastern palaces, whose typical reception hall was a domed iwan (hall opening to a forecourt), Medina Azahara’s reception halls had a ‘basilical’ plan, each with three or more parallel naves – similar to mosque architecture.

By 1031, Al-Andalus had split into dozens of self-governing states fighting among themselves for territory and power. Sadly, in less than 100 years after the palace was begun it lay in ruins – an 11th-century civil war engulfed the region and the palace was sacked and looted. Although it became an archaeological site in 1910, it is believed that only 10% of the complex has been currently excavated.  However, the visitor today can visit parts of the main palace, and imagine the grandeur and beauty of the complex in the 10th century.

The Library of Al-Hakam II

The library of Al-Hakam II (961-976), the second Caliph of Cordoba, was also one of the largest libraries in the world, housing at least 400,000 volumes. Reading was so valued that books became an art form in itself.  The Qur’an encouraged learning as brought you closer to God. Therefore, the city was full of libraries and great advances were made in the disciplines of philosophy, science, and literature. It was through the culture of Al-Andalus that many of the books from the ancient and classical worlds were rediscovered by Europeans through Islamic copies of lost masterpieces.

One other building to survive from the Umayyad era in Moorish Spain is the small 10th-century mezquita in remote Almonaster la Real. Although later converted into a church, the mosque remains more or less intact. It is like a miniature version of the Cordoba Mezquita, with rows of arches forming five naves, the central one leading to a semi-circular mihrab.

The City of Seville

The 11th century saw Seville emerge as the main city of the region from this chaos and home to the new conquering rulers – the Almoravid dynasty (original a Berber imperial dynasty from Morocco). For the next 200 years, the region was ruled by these invaders from north Africa – who were less tolerant than previous Caliphs and went on to take jihads to Christian North. It was the dawn of The Crusades.

The surviving symbol of this dynasty’s rule in Seville is the minaret that was part of the great mosque that stood in city –the Giralda (which resembles the Koutibia Mosque in Marrakech) – which is now part of the 15th-century cathedral. Seville’s cathedral was built to show the wealth of the city after it had become a major trading city after the years of the Reconquista in 1248.

The Struggle for Power

The 770 years that gave Islamic rule to Moorish Spain began to unravel with the struggle for power that reached Seville in mid-13th century. In 1248, there was an enemy at the gates of Seville – the Christians of the north. The Reconquista had began and it would last for 400 years. Seville finally fell after a two-year siege.

One oddity that is part of the Al-Andalus story is the continuing fascination and admiration for the Moorish style among the Catholics after the defeat in 1492. One fine example is in the 14th-century Alcazar palace in Seville (a complex of buildings left over from the earlier Umayyad dynasty that was also completely reformed by the Almohades dynasty).

In 1356, the Christian king Pedro the Cruel destroyed some buildings to create the Mudejar Palace in the hybrid Christian Islamic style, which was finished, according to inscriptions on the building, in 1364. Its front towers and gateway retain their Moorish origins to create a striking façade. Glazed ceramic tiles are striking features of Andalusian façades and interiors whose techniques were originally introduced by the Moors.

Elaborate mosaics in sophisticated geometrical patterns made of unicoloured stones known as azulejos, a type of painted tin ceramic tile, ideal for geometric patterns, were used as decoration for the palace walls and domestic interiors. This craft flourished in Seville, evolving in the potteries of the region in Triana.

The Last Bastion of Moorish Power – The Alhambra

The last bastion of Moorish power was in the far south in the hills, where it had shrunk to a small state in the mountains. Granada was the last Moorish capital of Al Andalus under the Nasrid dynasty (1238-1492) – the last Arab dynasty in Iberia.

Considered the gem of Spain’s Moorish heritage and the last great monument of Muslim Spain, the spectacular Alhambra (The Red One), is the best-preserved mediaeval Islamic palace and fortress in the world with its magnificent architecture and gardens.

There is no reference to the building being used as a palace until the 13th century, although a building had been in existence since the 9th century. The founder of the dynasty was Muhammed Al-Ahmar, who probably began by restoring an old fortress. His work was completed by his son Muhammed II, whose immediate successors also continued with the work on the palace.

The construction of the palaces Casa Real Vieja (Old Royal Palace) dates to the 14th century and is the work of two great kings: Yusuf I and Muhammed V. It was Muhammed V who built the spectacular Court of the Lions in the 14th century, an open courtyard with a central fountain supported by 12 lions seen today.

The Hall of the Ambassadors

The majestic Hall of the Ambassadors, one of the main attractions in the complex emphasises through design the eternal search for paradise – part of the philosophy of Al Andalus – a very powerful idea that is born out in the architecture of the palace. The Hall of Ambassadors is all about pattern, geometry and calligraphy. We are powerfully reminded that ‘There is no God but Allah’ and ‘There is no Conqueror but Allah’. It focuses the mind on the power of god.

The hall has an intricate mosaic ceiling with 8,017 pieces of wood used in the geometric pattern where there is a great use of the number seven (and also 4), representing seven heavens and goes on to reproduce multiples of seven in the designs. The scholar, Robert Irwin, believes that the number seven was important in Islamic mediaeval philosophical thought at the time, influenced by Rabia of Basra, a sufi mystic and poet. The Hall of the Ambassadors was also where Abu Abdallah (‘Boabdil’), in late November 1491, signed the treaty of surrender to the Catholic forces of Ferdinand and Isabella, before the final defeat in 1492.

The Generalife Palace and Garden

The Generalife palace and garden (Garden of Lofty Paradise) is designed to reflect descriptions in the Qur’an of wonderful orchards, pastures and flowers. The gardens are based on a geometric design and were ideal places for picnics which were hugely popular in Nasrid culture in late 13th/14th century Moorish Spain.

Palace of myths and legends. However, almost nothing is known about the functioning of the palace and daily life, despite the guides spinning fabulous tales to the ever-flowing crowds that now flock to see inside its walls. Perhaps it is better left to your imagination when you see the building reflected in the water of the gardens that surround it.

In 1469, Spain finally united when Ferdinand of Aragon and Isabella of Castile married. As The Catholic Monarchs, with a mandate from the Pope, they launched an assault against the far south and in January 1492, after 10 years of fighting, the last Nasrid King Mohammed XII surrendered the province of Granada. The Christian reconquest was complete.

For more information on Moorish Spain visit The Alhambra