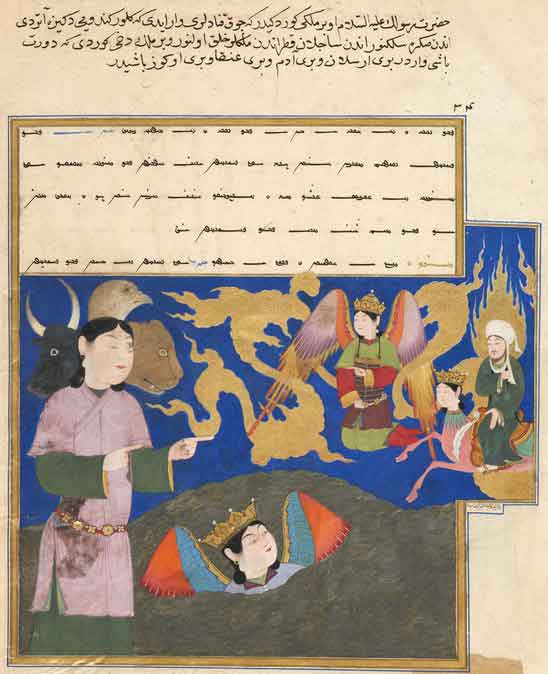 The Prophet Muhammad Meets the Angels

In 2018, The David Collection organised The Human Figure in Islamic Art: Holy Men, Princes, and Commoners. This 15th-century album leaf shows the Prophet meeting the Angels with 10,000 wings and the Angel with four heads by Sultan Ali.

Most people believe that it is forbidden to depict human figures in Islamic art, or at least images of the Prophet Muhammad. As Kjeld von Folsach, Director of the David Collection, Copenhagen, wrote about this exhibition: ‘This is not correct, though it can be considered a qualified truth. It is correct that in many religious contexts there was and still is a reluctance or caution, with regard to figurative renditions… Muslim views of this have changed throughout the ages and can vary according to different geographical locations, and in different strata of society. While some Muslims have criticised and destroyed human depictions, believing them to be idols, other have from the very beginning of the Islamic era, commissioned works of art with human figures as an essential element.’

The exhibition focused on this highly debateable subject with 75 works from the David Collections’ masterpieces created up to about 1850, all of them featuring in different ways human figures in Islamic art. A catalogue accompanied the exhibition.

The Prophet Muhammad Meets the Angel with 10,000 Wings & the Angel with Four Heads by Sultan Ali. Miniature from a copy of al-Sarah’s Nahj al-faradis (The Paths of Paradise) Herat, Iran, circa 1465, album leaf 40.8 x 30cm, The David Collection, Copenhagen, Denmark.