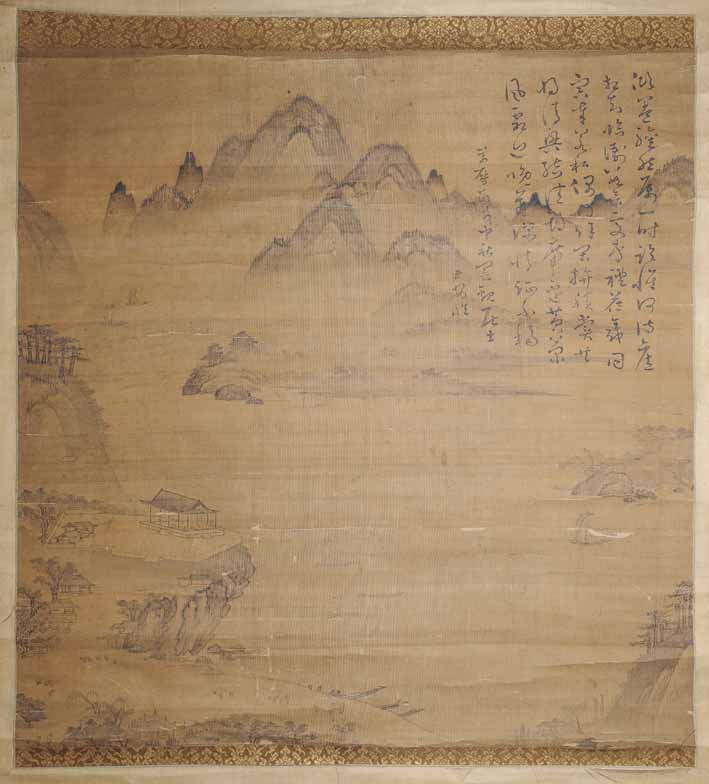 LAST YEAR, the Cultural Heritage Administration, based in Singapore, approached the Honolulu Museum of Art in Honolulu about applying for a grant to conserve the Korean artworks in its collection. Some of the Korean paintings in the museum’s collection have baffled experts for the better part of the past decade, even down to basics such as names and dates. Experts, of course, were happy to help with this 16th-century Korean painting conservation.

Shawn Eichman, Curator of Asian Art, and his colleagues knew this was the area in which they needed help. ‘Every new 16th-century work of Korean art is a game changer,’ explained Shawn Eichman. No wonder that the recent discovery of not one but two new paintings from late 16th-century Korea in the museum’s collection (one of which has been dubbed an ‘earth-shattering’ find), has caused quite a stir.

In January, three art-history scholars from the administration, including the world’s leading expert on Korean art, Chung Woo-Thak of Dongguk University, went to the Honolulu Museum and viewed 69 of its Korean artworks. They selected 21 paintings of historical, cultural and artistic significance for conservation; they were astonished by the range of styles, artistic movements, and periods that these 16th-century Korean paintings represent.

‘16th-century Korean art in some ways can be likened to a jigsaw puzzle with most of the pieces missing,’ Eichman said. ‘Every new piece that is found provides a greater context for all of the other pieces.’  The Japanese invasions of the 1590s resulted in the destruction and pilfering of the majority of Korean works of art – any artwork that managed to escape the period unscathed, especially something as fragile as a painting, is precious.

The most precious pieces the scholars found at the Honolulu museum were two paintings created just before these invasions. The first is a generic Chinese-inspired theme: Chinese philosopher and cosmologist Zhou Dunyi beside a pool covered with lily pads. The painting is in fine condition and the museum has wasted no time in putting it on display.

The second 16th-century Korean painting to catch the scholars’ eyes, and the one that has received the most attention in the press, is a genre painting of a specifically Korean subject: a scholarly meeting in a small pavilion, surrounded by a calm lake strewn with boats, before a backdrop of rocky mountains. This rare piece comes with a calligraphic inscription and a date: 1586. The inscription is believed to be by a famous Korean poet, quite possibly one of the participants in the meeting, which only adds to the excitement: the subject might be identified with an actual documented gathering.

Whereas Korean Buddhist and shamanist painting, and religious painting in general, has received a fair amount of attention over the years, landscape  painting and other genres associated with literary culture are still, in Eichman’s words, ‘poorly understood’.  Interestingly, most of the paintings identified as priorities for conservation during the survey at the Honolulu museum fall into this category.

Though the areas of loss and old repairs are minor, and almost all of the original painted surface and the inscription are preserved intact, the second painting, Scholarly Meeting, has suffered more damage than the first. It will be sent to South Korea where it will be worked on by Park Chi-sun, one of the leading conservators of Korean paintings. As Eichman explains, ‘conservation will allow the painting to be cleaned, the old repairs to be redone, and the many old cracks from rolling and unrolling to be laid flat’.

Part of the purpose of conservation is to improve the overall appearance of the painting; beyond this, of course, the main goal is to make the painting stable and prevent any further loss. Though the act of conservation is riddled with controversy, Eichman is confident both in the process and the capability of those carrying it out: ‘To my untrained eye, what a conservator can accomplish transcends both science and art, and is elevated almost to the level of magic’.

Mounted as a Hanging Scroll

This 16th-century Korean painting is mounted as a hanging scroll and, since the current mount, of Japanese origin, is in poor condition, it will be completely remounted when the conservation work is done. All old hanging scrolls underwent regular remounting, and the common practice was to reuse any materials from the previous mount that could be recovered. In this case, however, the decision has been made not to preserve the latest Japanese mount.

As well as belying the work’s origins, the humble materials of the mount conceal the painting’s importance. Remounting the painting according to a traditional Korean aesthetic will re-establish both its contextual background and historical value. Once the conservation process is complete, the painting will be displayed in Korea before returning to Honolulu, giving both scholars and the Korean – and wider – public a chance to study it.

Within the known corpus of surviving 16th-century paintings, a vast number are dated on stylistic grounds alone, so there will always be a degree of uncertainty as to how accurate the dating is. Eichman felt fairly certain that the first painting was Korean, based on the styles of certain ceramic vessels that are present in the composition, and that it dated to the 16th century, from the way in which the landscape and architecture are portrayed, but Scholarly Meeting came as ‘almost a complete surprise’.

Any painting that comes with an official date and can be placed in the 16th century, without question, is important because it becomes a standard against which other undated paintings can be judged.

Korean art holds a unique place within East Asian art history that is wasted when understood only through the lens of either Chinese or Japanese art. The Honolulu museum originally agreed to take part in The Cultural Heritage Administration survey simply to determine whether certain paintings in their collection were in fact Korean; they hoped to gain basic information about the paintings that would form the foundation for further research.

After decades spent by Korean scholars trying to recover their cultural heritage in the wake of colonisation and the Korean war, the fact that discoveries as significant as these have come to light, does, as Eichman says, ‘stimulate the imagination in exciting ways’.

The Honolulu Museum of Art acquired the 16th-century Korean painting Scholarly Meeting as part of a collection formed by Richard Lane, the great scholar of ukiyo-e art and literature. It was acquired by the museum in 2003 and welcomed officially into its fold in 2010. The collection included more than 3,000 paintings and 11,000 volumes of Japanese woodblock printed illustrated books.

Now, if a survey of around 60 paintings has resulted in roughly one-third being deemed worthy of conservation, and one an ‘earth-shattering’ find, imagine the possible discoveries that might be lurking elsewhere: in the Lane collection, the Honolulu museum as a whole, and both private and public collections of Asian art.